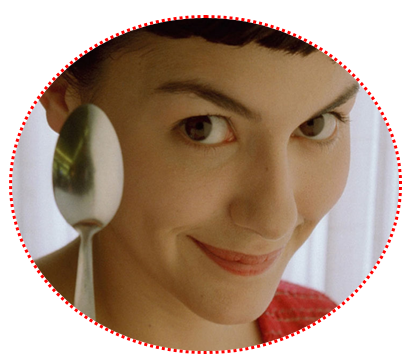 15 French movies you need to watch

Here is a list of French movies to watch that will allow you to combine relaxation, pleasure and Learning!

or know a little bit more about the culture of a country! Amélie (Audrey Tautou who wins the Best Actress César for this role),

a young waitress in a bar in Montmartre, spends her time observing people and letting her imagination wander.

She has set a goal: to do good to those around her. She invents ploys to intervene incognito in their existence.

He divides his time between a ghost train and a sex shop,

and seeks to identify a stranger whose photo reappears constantly in several Photomaton booths.

We love the imaginative world of this movie, so close to us!

The music from this movie is also fantastic, and composed by Yann Tiersen, listen here 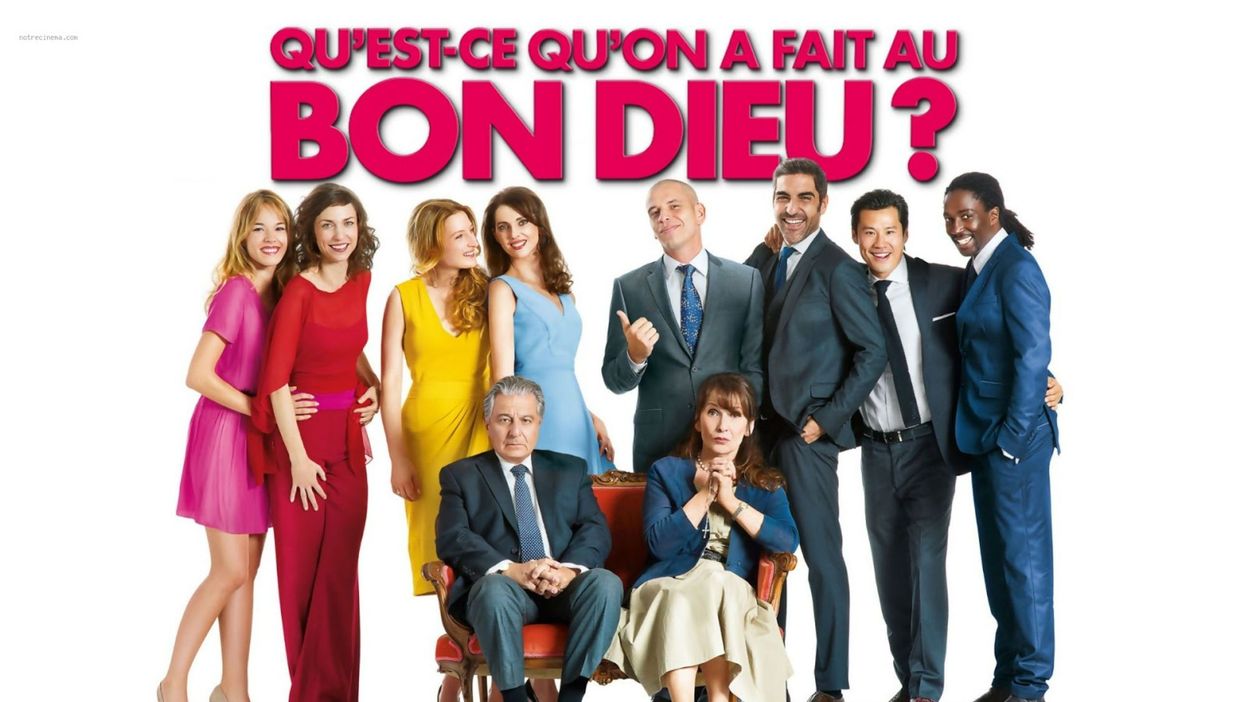 But they have always had to be open-minded …

It was difficult to accept that their first daughter married a Muslim, their second a Jew and their third a Chinese.

Their hopes of finally seeing one of them getting married at the church are therefore on the youngest,

It’s a very modern movie about the difficulty of being a mixed couple, and cultural differencies, very interesting. 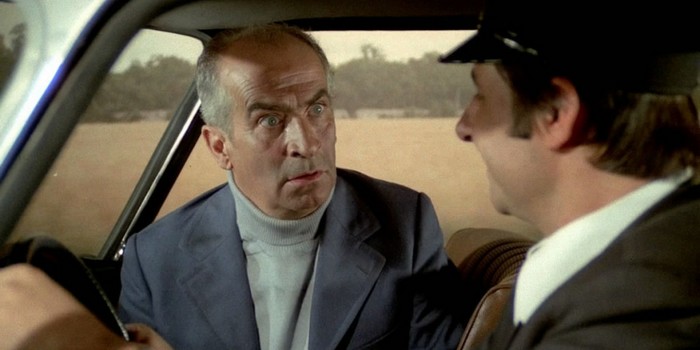 Following a misunderstanding, an irreconcilable and racist businessman (Louis de Funès, very famous) finds himself confronted in spite of himself with a settling of accounts between terrorists from an Arab country.

In order to sow his pursuers,

he disguises himself as a rabbi after having met Orly Jewish clerics from New York.

This French movie was famous in USA and abroad also, the only one with Louis de Funès,

who played in more than 140 movies.

The music of this movie is also mad by Vladimir Costa. 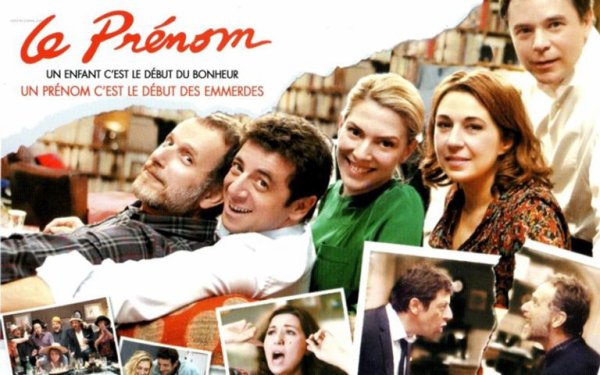 Vincent (Patrick Bruel who is also a famous singer in France), triumphant quarantine, is going to be a father for the first time.

Invited to dine with Elizabeth and Pierre, his sister and his brother-in-law, he finds Claude, a childhood friend.

While waiting for the arrival of Anna, his young wife eternally late,

But when we ask Vincent if he has already chosen a name for the unborn child, his answer plunges the family into chaos. 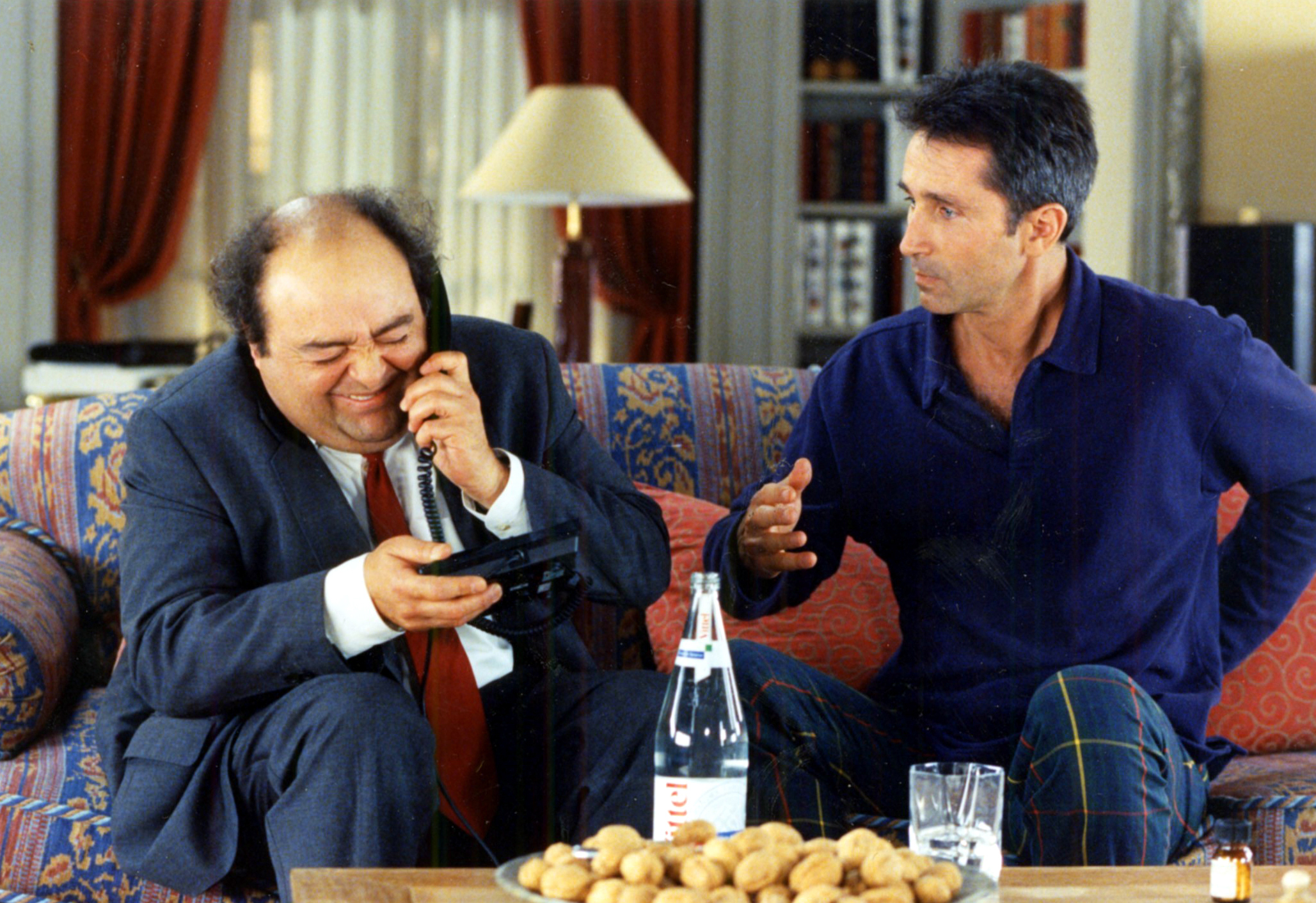 Every Wednesday, Pierre Brochant (Thierry Lhermitte) and his friends organize a dinner where everyone must bring a con.

Whoever has found the most spectacular is declared the winner.

Tonight, Brochant exults, he is sure to have found the rare pearl, a world class cunt: François Pignon (Jacques Villeret), accountant at the Ministry of Finance and passionate model matches.

What he does not know is that Pinion is a king in the art of triggering disasters.

This movie comes from a play who is also a success.

This is a very funny movie, you will enjoy it! 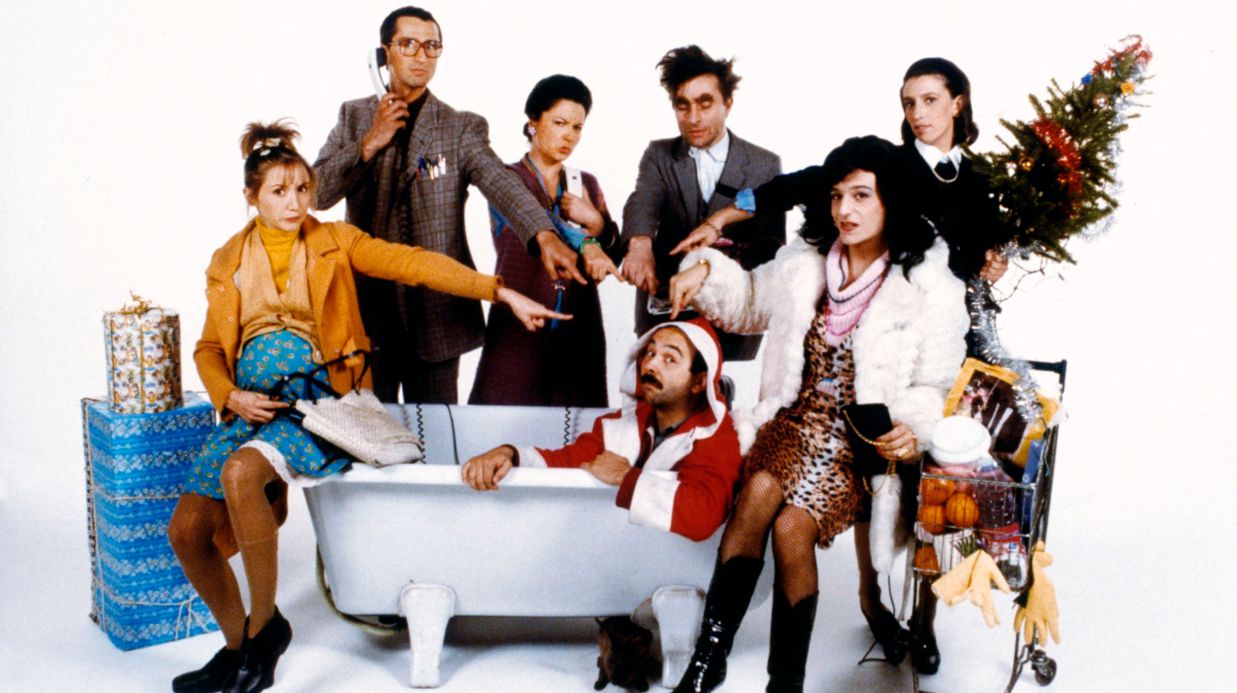 The Paris hotline SOS distress-friendship is disrupted on Christmas Eve by the arrival of wacky marginal characters who cause chain disasters.

This French movie was adapted from a French play,

originally plays by the troup of  » Splendid », with Thierry Lhermitte, Gérard Jugnot, Miou-Miou…

It’s a cult film for the French. 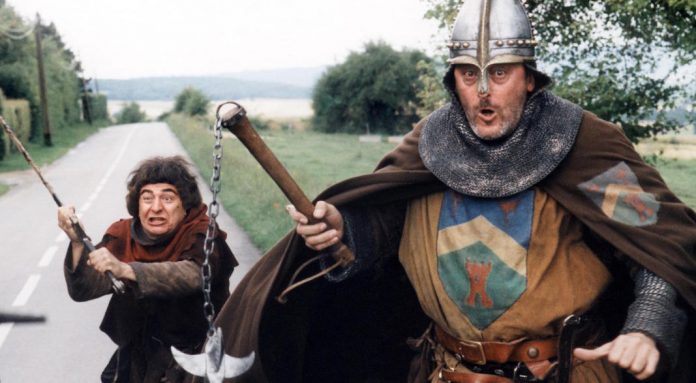 How in the year of grace 1112 the Count de Montmirail and his faithful squire, Jacquouille the Rogue, will find themselves propelled in the year 1992 after drinking a magic potion made by the enchanting Eusaebius allowing them to get rid of a terrible fate .. In short the east appropriate person for the job.

They will make live together Vivaldi and Earth Wind and Fire, costumes and stockings …

Two worlds will telescope, tame, to give birth to a friendship as crazy, funny and strong than unexpected, a relationship unique that will spark and make them … 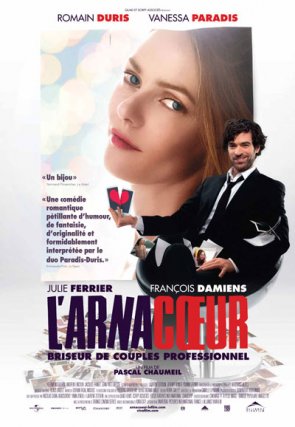 Your daughter is dating a bad guy ? Your sister got bogged down in a destructive passionate relationship?

Today, there is a radical solution, her name is Alex (Romain Duris, very famous French actor).

But Alex has an ethic, he only attacks couples whose wife is unhappy.

So why accept to break a successful couple of thirty-something who gets married in a week?

The actress is Vanessa Paradis, who is famous as a singer and an actress, and was in couple with Johnny Deep.

Romain Duris is famous and played in more than 30 movies already, he is 44 years old. 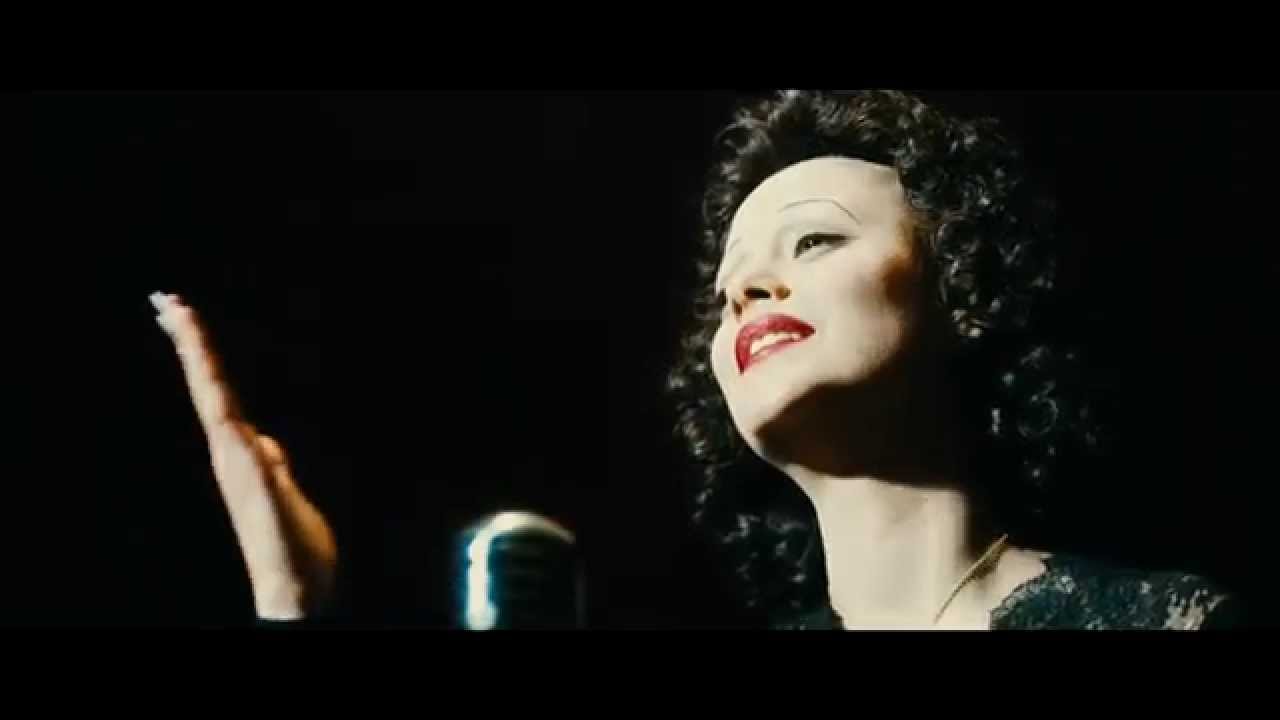 From childhood to glory, from victory to injury, from Belleville to New York, Edith Piaf’s exceptional career.

Through a destiny more incredible than a novel, discover the soul of an artist and the heart of a woman.

Intimate, intense, fragile and indestructible, devoted to her art until sacrifice, here is the most immortal of singers …

An amazing movie to know more about Edith Piaf and her life, played by Marion Cotillard, who is now an international actress, and wins the César of the Best Acress with this movie.

You will also discover Paris one hundred years ago. 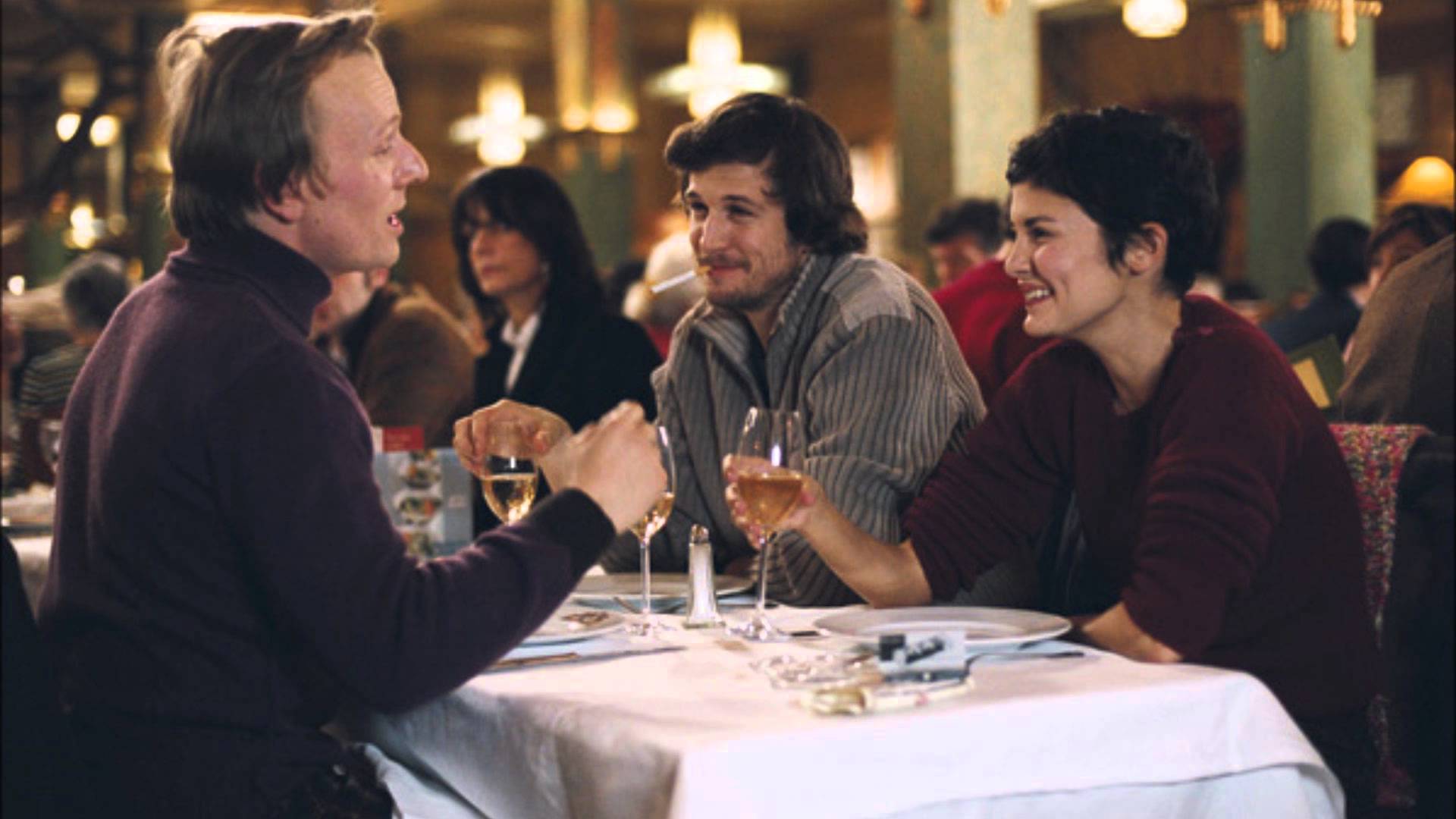 Camille does housework at night in the offices and draws gracefully from her lost hours.

Philibert is a young aristocrat keen on history, timid, emotional and lonely, he occupies a large apartment owned by his family.

Franck is a cook, manly and tender, he loves his grandmother, Paulette, a fragile and funny old lady.

Their doubts, their sorrows, it is together that they will learn to soften them, to advance, to realize their dreams.

They will discover and understand that together, we are stronger. 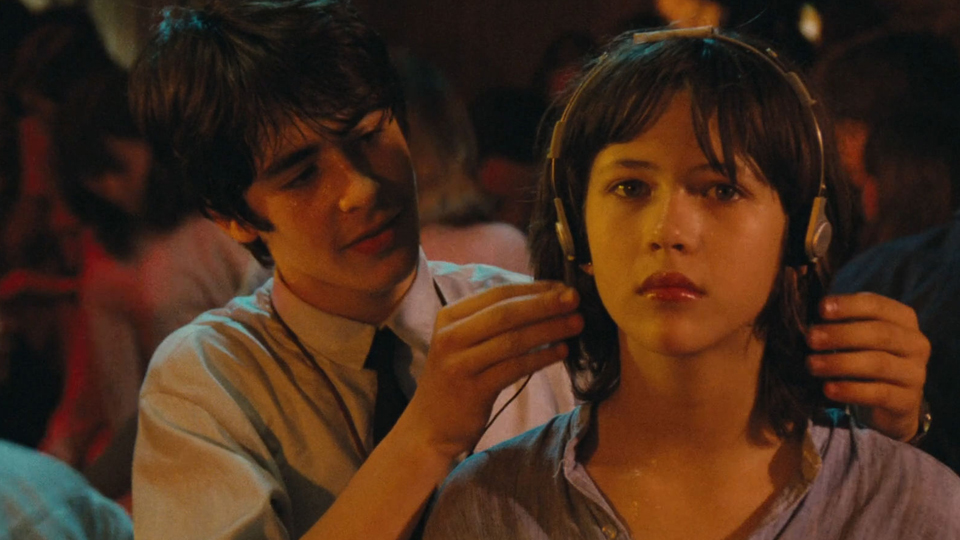 Vic lives quietly between high school, his parents and Poupette, his great-grandmother.

When her mother learns of the existence of a former mistress of her husband, she decides to « make a break » but at the height of her 13 years Vic thinks only at her first boom …

Very famous movie in France, who had a big success with more than 4 millions entry (a lot in France).

Also known for the music mad by Vladimir Cosma. 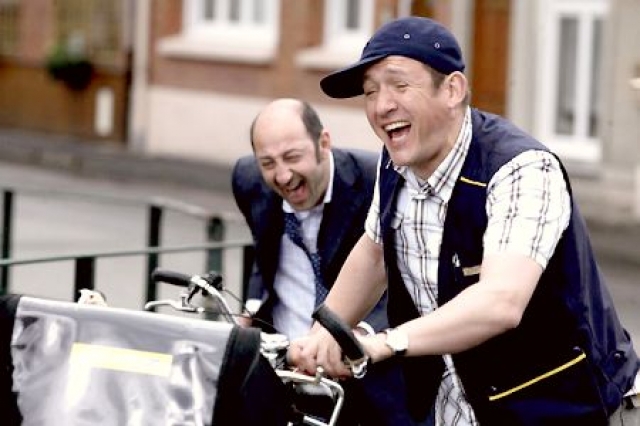 A director of the Post Office in Provence is, to his detriment, transferred to Bergues, a small town in the North.

His family refusing to accompany him, Philippe will go alone.

To his surprise, he discovers a charming place,

a warm team and welcoming people.

He becomes friends with Antoine, the postman and carillonneur of the village, the possessive mother and the upset loves.

You will discover the difference between the North France and the South France, and that French people are not similar. 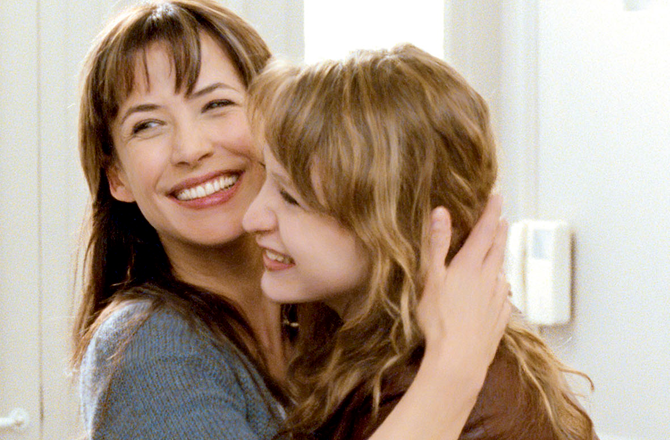 A Parisian high school student breaking up with her boyfriend is singing the apple by the best friend of it.

Her tense relationship with her mother, divorced still in love with her ex-husband and courted by a policeman, complicates things.

You will meet one of a very famous French actress : Sophie Marceau (who was the teenager in La Boum),

on the left on the picture.

A conductor remembers the music teacher who influenced him and goes back into the past.

In 1949, Clément Mathieu, professor of unemployed music, was appointed supervisor in a re-education center for minors.

Step by step, he will try to introduce his students to music theory and singing.

Dive into the French after-war atmosphere, that will tell you a lot about French culture.

Absolutely French is the first French school ?? dedicated only to expat spouses.
Our main mission is to promote double career among expatriate couples.

With our fun, friendly and innovative French trainings, we guarantee you a better integration! ❤️

5 essential apps to know when you arrive in Paris

Justificatif de domicile : What is it ?