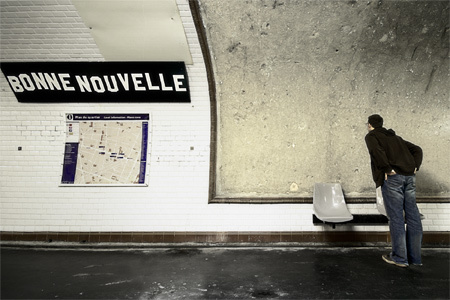 If you’re a regular of the Parisian metro, you might have already swished by the curiously named “Bonne Nouvelle” (or “Good news”) metro station.

Named after the district of Bonne-Nouvelle, which in turn owes its name to the nearby church of Notre-Dame de Bonne-Nouvelle (or “our lady of good news”, referring to the Annunciation), this metro station does have a name to impress.

As if the strange name wasn’t enough, the metro station’s signage verges on the extraordinary no less than its wording. If you looked close enough, you’d notice that the wavy font used in the Bonne Nouvelle station signage is printed in a fashion similar to the well-known Hollywood Sign. The station was designed using a cinema theme in celebration of the centenary of the subway and as a tribute to the area’s contribution to the theatrical and cinematic arts.

So the next time you stop by, do take a look, and choose what your personal “good news” for the day would be. Who knows, they might very well come true, after all?